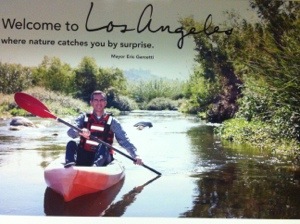 We were late-night bleary, my wife and I, after flying across country for the holidays. Letting the LAX people mover trundle us as I looked blankly at the late-night crowd, suddenly I felt my wife touch my arm.

Indeed, at the end of the motorized sidewalk, in dim, tunnel light, Mayor Eric Garcetti smiled at us, a welcoming smile. His kayak looked travel ready, and the background, well, it was an unmistakably beautiful section of the river. If the wind hadn’t already been knocked out of me by the air trip, the sight of our mayor sitting in a kayak on our river certainly would have done the job.

It turns out that UCLA photographer Catherine Opie took the snap, along with others that place the mayor alongside more familiar landmarks such as the Watts Towers. According to an article in the Los Angeles Times, ideas for the backdrop were solicited online, and the top choice was the river.

In a matter of only a few short years, the Los Angeles River has moved from back-shadow orphan to upfront starlet. Instead of getting ticketed for daring to fish the river, now we have the top political figure beckoning visitors to come on down, don a life jacket, pick up a paddle, and get wet. Incredible.

What will 2014 hold for the river? Look for major riverside land acquisitions by the city, a renewal of the recreational zone during summer, and, possibly, the next step in the Army Corps billion-dollar makeover.