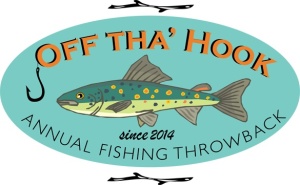 Remember back to the bad old days, say, four years ago, when some of our city’s fisherfolk were issued citations for having the audacity to fish in our river?

Flash forward to Saturday, Sept. 6, precisely 9 a.m. at North Atwater Park in Atwater Village. Not only is it the last day of this year when you don’t have to have a license to legally fish, it’s also the date for the inaugural, the one and only awesomeness of FOLAR’s “Off Tha’ Hook.”

You read that correctly. This is the first fishing derby to hit the banks of the Los Angeles River since 1849. OK, I made that part up. If you actually know of another fishing tourney on the river, please comment below.

— fishing contest, for fly fishing and traditional, wading OK, from 9-10 a.m. Yup, one hour. After biologists and volunteers document weight and length, the fish will be returned to the rio.

— the contest is followed by an hour’s worth of family fishing and education. Angler volunteers (you could be one) will help children learn conventional fishing. This will be a supervised, safe time for the kids.

— awards ceremony at 11 a.m., includes a prize for the “rarest” species. All children who are registered and participate in the family fishing event will receive a blue ribbon.

— food truck, that’s the rumor, and a good bet. I don’t know which one.

I’ll post better details as they become available, but I do know you want to sign up soon, as the number of anglers for this historic event is limited to 25 anglers and 25 kids.

Wow, I really can’t believe I just wrote this up.

Back in the day, Dick Roraback represented the journalist I wanted to become: after being graduated from The Sorbonne, he’d worked on the Herald Tribune in Paris (While on assignment in Africa, he’d somehow bamboozled the desk into publishing his story with the byline “By Ghana Rehah,” which got him suspended.); he was worldly, snide, grouchy, looked very old, and ripped through my fledgling restaurant reviews in a torrent of computer red ink. He seemed to me a refugee on the Los Angeles Times copy desk, a bit of the lion in winter. At the time, I wanted nothing more than to be like him — bold, intelligent and brash, thumbing his nose at the world and having a great time doing it.

I did wonder how this talented writer landed on the copy desk, reading the works of others, but no longer producing himself. Maybe “be brash in moderation,” I thought to myself.

By the time he’d again taken up ink and plume, I’d moved across town to become the travel editor for the Herald Examiner, and I didn’t read his series “In Search of the L.A. River,” published between 1985 and 1986.

In a recent paper entitled “Writing a river: how journalism helped restore the Los Angeles River,” academic Tilly Hinton argues a strong case for Roraback’s contribution to raising awareness about the river, and how this awareness helped to create the political will for change. She credits him alongside poet and FOLAR founder Lewis MacAdams as two pillars of the event.

I think Roraback would feel peeved to think of himself as a pillar of anything, and from what I’ve read MacAdams was none too pleased with the snarky tone Roraback used in his pieces. (For that matter, MacAdams also seems a wholly unlikely pillar, yet that he is, with a recent riverside plaque to prove it.)

For the series, which began at the river’s mouth in Long Beach and moved up to the headwaters, Roraback invented a character named “The Explorer.” At one point, The Explorer visited a man who kept an aquarium of fish captured from the river:

“Up in Atwater Glen on the other side of the channel, Tom Babel, manager of the riverside Port of Call apartments, allows as his community is a peaceful enough place to live –“You just gotta watch your back.” Just north, it seems, is “Toonerville, where anything goes.”

Even so, Babel likes living by the river, though he keeps his RV primed for a quick exit. “There’s been occasions when the rain got heavy and the river got two feet from the top of the bank,” he says. “I’d already started packing my important papers in the RV, ready to head for the high ground. . . . “

“After the rains,” he says, “there’s rainbow trout this big! Keepers! You get catfish, carp, crayfish. Come up to my apartment. I have something to show you.”

Indeed he does. In Wickline’s flat is an illuminated fish tank holding an amazing variety of fish — gold, brown, white — all taken, he says, from the Los Angeles River.

“Good fishing when the river comes up,” Wickline says, “Except sometimes you can’t take a step for all those tiny snakes.

What I find particularly interesting about this passage is that, if true, rainbow trout were still in the river in the mid-80s, contrary to everything I’ve read about their disappearance from the river decades earlier.

The series certainly sparked interesting letters, including this one from Gene Lippert of Hacienda Heights:

“Just a note of appreciation for all the hard work Dick Roraback put in to bring us his fascinating story of the present Los Angeles River (‘In Search of the L.A. River,’ an occasional series.) I am following his tale with great interest.

“You see I lived my Tom Sawyer youth on the Los Angeles River in the area of the Imperial Highway bridge. That was before the ‘big paving extravaganza.’ We skinny-dipped in the pools, caught crawdads by the dozen and boiled them in an old can filled with river water and a dash of vinegar. We always kept supplies such as salt, pepper, coffee, cigarette butts (good for a couple of more puffs) in tin cans buried in the river bank. Small-sized trout were plentiful and easy to catch on a bent pin (had to jerk the fish out of the water and onto the bank the first time he nibbled or away went your bait). We slept overnight in the river bed most of the summers (dry, clean white sand). We were almost ridden over by a bunch of horses one night while sleeping. We had made camp in weeds four or five feet high and the fire had gone out.

“One time we stole redwood from an irrigation flume and built a boat. We got our caulking by digging the tar from between the expansion joints in Imperial Highway and melting it over a bonfire. The boat was a bust — it kept tipping over.”

So now I find Dick’s shadow once again moving across my writing life. Sometimes unlikely people follow you through time in the most unexpected ways.